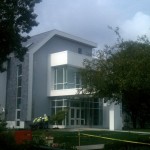 Two years ago, our school began the process of planning the transformation of our high school, also know as our Upper School.

The architectural firm which led the process was OWPP/Canon Design. This post is a collection of the my reflections of living in the space during the first week of school which concluded this past Friday. For the first four school days, we are starting to experience the goals of the design team and architect Trung Le.

Le’s is one of the principles of the philosophy called the Third Teacher (http://www.thethirdteacher.com/). a group focused on collaboratively exploring the ways that design can transform teaching and learning. The Third Teacher can be defined as:

In the 1940’s pioneering Italian educator and psychologist Loris Malaguzzi founded the Reggio Emilia approach to learning on the premise that children develop through their interactions, first with the adults in their lives -parents and teachers – then their peers, and ultimately with the environment which is around them. Environment is the third teacher.

~ from the Third Teacher web site

The North Shore Country Day School Upper School is one culmination of the collaboration and design process led by Le and the team from Cannon Design/OWPP. Early in the process, Cannon Design/OWPP led parents, trustees, administrators, teachers, and students through a process called Design Thinking, where the group was presented with a problem, which was to design a new learning space to support teaching and learning in the 21st Century. Working in six teams, these groups sketched, but rough prototypes, and then presented their ideas. Le then took the ideas along with the design team’s  observations to design a space which celebrated the core principles of North Shore, the student-student, student-faculty, and faculty-faculty interactions that are the hallmark of the North Shore experience to create a space where these ideals could be amplified and extended to support the new types of collaboration, connection, and communication mediated through technology that are transforming all aspects of business and life today.

One of the first aspects of the new building space is how true the artists original sketches exist in the execution and building. My previous experience is that the sketches usually are modified or changed. However, in our case at North Shore, the original sketches can almost be photographs for the new spaces. It is a testament to the Valenti Builders, who were able to construct the space as it was intended. 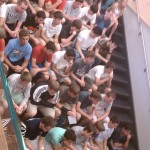 In order to understand the impact of the first two teachers, adult mentors and peers, it is essential to talk about the environment in order to gain context and perspective.  The transformation of our space has resulted in the elimination of classrooms and hallways. In their places are Learning Studios, Seminar Rooms, Project spaces, Collaboration spaces, and quiet study areas. While some may only see the shift as a change in vocabulary, the shift in connotation of the way we name our spaces gives permission to do things differently.

One of the principals that Le used in the design of the space was to increase the number of intellectual collisions which occur on a normal day. On our garden level, we have a faculty work space which is divided into an office and a lounge for more informal interactions aimed to increase collegiality. There is also a private phone area for personal, private calls if needed. In addition, this is where students gather with their lockers. There is one unattached conference room, one learning studio with an attached seminar room, and two conference spaces, a leadership lab and a collaborative learning lab which features two six-person media:scapes. 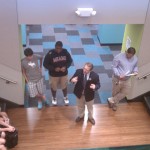 Between the garden level and the first floor is a grand staircase which can double as a meeting space (see image above). This space can seat 134 and can be used for performances or other gatherings. One the first floor are administrative offices, three learning studios (two with attached seminar rooms) and a commons area with bar-high seating overlooking the grand staircase. Around the outside of the commons are some coaches and soft seating as well.

In the second level, we have a variety of rooms. There are three learning studios, two learning studios with attached seminar rooms, and two learning studios and one 2-D media space equipped with sliding glass walls that empty into two project studios which contain tables. There is also one conference room which is not attached to any learning studio. Along the inside  walls, there are counter tops with chairs, which also encourage collaboration amongst members of the school community.

As we move upward, the idea is that the spaces are moving from more social and social-learning spaces to ones which will support quiet study. On the third level, there is a quiet study area, four learning studios, and the offices of our learning specialists. Like the second level, even those spaces which are more traditionally thought of as hallways are made for both formal and informal learning. Again, there are couches, soft chairs with desk arms, and counter tops along the walls with chairs for quiet work or collaboration. There is also a digital media lab to be used by clubs and classes with specialized equipment for that purpose.

One other item to note, is that all of the furniture, teacher’s desks and chair, Node chairs from Steelcase, seminar tables and chairs all have wheels. The teachers desks and some of the other round tables which can be found in the learning studios are height adjustable. This allows for students and teachers to work either sitting or standing.  I personally have enjoyed this feature, as it allows me to stand for a period of time rather than always having to sit. This is to support adaptive reconfiguration of the space quickly based upon the learning activity which will be occurring in each space.

As for technology, each learning studio and lab is equipped with Eno boards and projectors. The seminar rooms feature flat panel displays and we have additional media:scapes available.

The First Teacher – Teachers and Adults 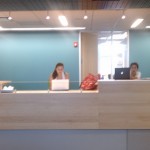 The impact of the new building has been seen right from the beginning. I personally have seem the increase in my collaborations, as I have taken up residence in the common space last week to be available and visible to both teachers and students trying to connect their systems to the network, learn the new features of our migration to new Lenovo Tablet PCs with Windows 7, or connection problems to our virtual learning spaces, our Google Apps and Moodle environments. Most days, there were two or three students around my location at the counter as we were working on their various problems.

Observing from this perch allowed me to see how the students began to experiment with the space. During the week, we had several community meetings on the grand staircase, first to welcome students back to sharing Interim Week projects. With the intimate seating, it seemed that students were more focused, they were close and facing the presenter. Or it could have been that it was the first week of school, but I will wager it was the effect of the new spaces.

It was also interesting to see how teachers would drop into this space during their free blocks and interact with the students, both formally (for class) or informally (general conversation about a shared outside passion). Either sitting on the couches, the small workgroup tables, or simply sitting or standing around the counter overlooking the grand staircase, students and teachers were connecting in a more relaxed way brought forth by the furniture and design decisions which were made.

Due to the nature of the first week, my time was focused in the garden level (for some private time in the faculty workroom where I could do concentrated work), the commons area, or at my desk in the library offices (in a different building). It is my hope as the immediate issues resolve themselves that I am able to begin to take residence on the second and third levels more to see how those new learning and teaching spaces are playing out. 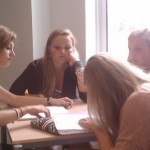 While I did not get to spend a significant amount of time on the second and third levels, so I did not see the impact of the increasingly focused academic work, I did get to see how the students begun to adapt to the new spaces. I enjoyed seeing how students who had free periods would gather on the grand staircase and just lounge with books and computers open, doing homework and other tasks. They gravitated to the small worktables around the outsides of these spaces and kicked it back on the couches in the spaces. These spaces appealed to more to their nature that learning is increasingly more social. These spaces were built for this space and these students were completely in their element using these spaces.

Even with this great new space, they did not abandon the library spaces that they were forced to use more last year than they had in years past. When needing to go to my library office, either for something that I needed to complete a task or to do work better suited for that space,  I was pleasantly surprised that there were more students working and hanging out in the space that I originally thought that there may be. I am hoping that this trend continues throughout the year.

As we continue through the year, I will share additional reflections on how we are being transformed by our new learning space. There is a really positive buzz and excitement and I am looking forward to the challenges of the upcoming year.

One thought on “Reflections for 1st Week in Transformed High School”