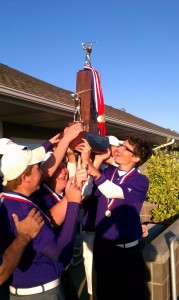 Yesterday, the Golf team at North Shore won the school’s first State Championship in the school’s ninety-three year history. What is truly remarkable about this is are one of the smallest high schools, enrollment wise, in the state.

This was not an easy victory. After finishing the sectional tied for first, the team went down to the finals as a team for the second time in three years. But, in the state preview, we were not mentioned at all even though we tied for the sectional champions, so we were definitively the underdogs in the tournament.  After the first nine of the 36 hole, day finals, our squad hovered around fifth place. But a strong back nine propelled the team to 2 stroke lead.

On Saturday, my day was spent checking the updates provided by the various volunteers crowd sourcing the finals.  After what seemed to be forever after the team’s tee times, scores started to trickle in. After Saturday’s first nine, we were clinging onto a tight lead. But at the next update, with scores through twelve holes, the team had slipped to second, four strokes down. After fifteen holes, the same. But the team didn’t seem to give up, instead playing their game. They gained five strokes on the 18th hole to vault them to a three stroke victory. Talk about pressure.

But what I find remarkable is that while golf is a major part of each of these boy’s lives, they are not defined by golf. Instead, I think about the senior captain who has been and continues to be a major force on our school newspaper as one of the leaders while drumming in the instrumental ensemble. I think of two of the golfers who were major contributors on our Middle School Science Olympiad teams, one who was a very skilled plane designer, wearing medals that were earned at the regional level and contributing to a 5th place in the state Science Olympiad Team. I see them on the stage, performing and in the classroom, working academically.

What I love about working at North Shore is that it is impossible to get pegged into only one hole, rather, we challenge our students and ourselves to continue our learning and performance in many aspects of life. We are not defined as being an athlete, an artist, a performer, or a student. Instead, we are defined as students, learners, and humans. And this makes all the difference in the world.

Picture courtesy of our Athletic Director, Patrick McHugh. It comes from his blog, North Shore Country Day Athletics Blog, on a post entitled, “Here is the Moment.” Please check out his outstanding work.