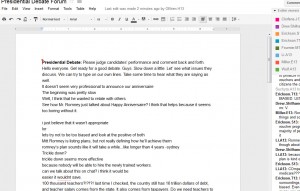 The hallways are filled with the sounds of middle school students, primarily eighth graders, dissecting the second presidential debate from the evening before. Argument, points, and counter-points are readily being shared as students break down the various issues through their fourteen year old lenses. This is yet one example of how learning is and has always extended beyond the confines of of a 45 minute block, four or five days a week. How can we, as the adult mentors in their lives, provide the framework and perspective to help them understand the arguments presented during the debate to help them discover and unravel the complexity of the issues being discussed?

One way that we are attempting to accomplish this goal of providing the framework and perspective is through the use of the collaborative features of our Google Applications implementation. During the first debate, one of our teachers, Drew Shilhanek, created a Google Document to which he invited his me and his class. The purpose and goal of this experiment was to provide a place for his students to take notes during the debate. However, students quickly found the document chat feature of Google Docs and Drew, along with his students, evolved into using this area as a back channel to ask each other questions and comment, as was being done on Facebook and in Twitter, throughout the debate. The use of the back channel allowed for the students to engage in discussion as the events unfolded in a closed, safe environment, rather than waiting to return to the next class meeting to pose clarifying questions or to comment on an argument which was being made.

Having watched this organic growth, Drew refined his goals for the use of the Google Document for the second debate. To prepare the students for the debate, Drew asked the students to predict the questions that undecided voters would ask of the candidates. This allowed them to focus on what they thought were the important issues to the undecided voters. While most of their predicted questions were not asked during this debate, since most of these students have decided who they are backing and thus are not as open-minded as the questioners, it did allow them to think about what the issues were.

During the debate, students again used the Document Chat to engage and comment about the debate. Drew and I were in the chat. Our roles were to provide leading questions to help the student begin to make sense of the arguments being presented. Since the students are only fourteen years old, they do not have the historical perspective and knowledge base to completely understand the ramifications of each candidates arguments, such what a Pell Grant is and who can qualify. We purposefully stayed neutral and simply acted as guides and moderators of their discussions about the debate. Hopefully, this provided a framework so that the students would begin to understand that the solutions to the problems are complex and cannot easily fit into a simple sound bite or cliches. We want them to search for the truth under the candidate’s rhetoric.

Since this is a new experience, I inquired as to how this type of discussion, facilitated electronically and in the moment, may have helped or distracted them from watching the debate. One student commented that, “initially, the chat window did somewhat distract me from the viewing of the debate. I think that chat window did help me understand better than before.” A second student noted, ” I have been using Gmail and  Google Docs for a while, and I have never done something like that with so many people at the same time. It was very interesting to see what other people were writing, and other’s opinions.”

Drew and I are already trying to improve upon the format to make the experience better for the students for the third debate. I cannot wait to see what we come up with.