Earlier this week, I received and email from the Google for Educators group that I belong to. In it, they introduced their Doodle4Google. Google is eventually going to award a student whose work is judged the best a $10,000 college scholarship and their school a $25,000 technology grant. The best 40 designs are going to be used by Google on their web site. Earlier this year, Google was encouraging students to work on several challenges, most of them documenting open source software. Complete three tasks, earn $100. Complete a certain number of projects and the student would earn to trip to the Google Campus. 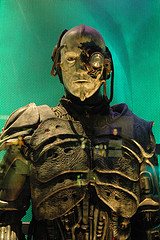 I don’t begrudge the student who will earn a scholarship and the school who may get an infusion of technology that is desperately needed. I do appreciate the tools that Google is making available (Docs, Presentation, Earth, Maps, Sketch up) to educators for free. These are wonderful tools which provide the foundation to help reform education.

From a certain perspective, what Google is doing could be viewed as slave labor. By tapping into work efforts of children, most of them under the age of 16, Google is saving themselves thousands of dollars of their development time. At the cost of $875 per logo, which I am guessing that they can write off as a charitable contribution, they will now have 40 new logos to display. At a net cost of $0 development time for themselves.

This is the same way that Google hooked a few of my high school students into documenting different projects, which took them several hours to complete, Google was able to have tasks completed for less than the going rate.

So I am a bit skeptical about Google’s motives. Sure, I can understand their desire to build brand loyalty into young people, so that they are more embedded into the Google brand and culture more so than they may already be. Google may be no better than Ganz, with their Webkinz, and developing branding and developing the culture of social networking. But  why are they creating such a brand loyalty in young users? Are they making sure that they can stay profitable and continue to be a great investment for the future? Are they creating the Google Borg? Are we getting closer and closer to the predictions in the EPIC series of videos?

I think we may be and I am concerned. But I will let you decide.