Why should you want to know? Don’t you mind about the future?

Don’t you try to think ahead?

Save tomorrow for tomorrow, think about today instead.

What’s the buzz, tell me what is happening

I could give you facts and figures. Even give you plans and forecasts

It is already a trending topic. There are more conversations and rumors swirling about the announcement that is going to be made tomorrow, at 12:00 noon CST ( – 6:00 GMT). Just like 26 years ago, everyone is whipping  themselves into a lather, hanging onto the idea that tomorrow,  on January 27, 2010, we are going to find out why 2010 will not be like 2010 anymore.1 I can imagine how Steve Jobs will walk up on stage and make the announcement and demonstrate Apple’s “newest creation”. Like the original Macintosh commercial, the Apple lemmings will march along to queue up and wait for the newest device.

Now that does not mean that I won’t be excited or will be interested in obtaining this new device, especially if this is the long rumored Apple Tablet, Apple iSlate, or whatever they choose to call it. In fact, if it is, I will break my usual habit  of waiting until the second generation of a new technology to get this device. Because of existing contracts and coverage area, I have not gotten on the iPhone bandwagon, although the rest of my family each has their own iPod Touch. Me, I have been dealing with my used 3rd generation 30 Gb video iPod for a few years . This device may be revolutionary and may transform education, but the transformation will take time, it will not be instantaneous.

Why do I feel this way? For one thing, we have all been down this road before with a variety of new initiatives.  SMARTBoards are going to transform teaching (1998). 1-to-1 Laptop programs are going to transform the classroom (1996). Palm handhelds are going to provide the mobility and create an equity of access (1996). All of these innovation in the hands of individuals made significant impacts in individual classrooms. But these products did not  scale to the level that many initially predicted, with the exception ofsome schools using a 1-to-1 Laptop model. Even when successful, these transformations have  taken more time than we first hope and believe.  We are still waiting for systemic transformation using any of these paths. I am seeing a growth in the potential of using iTouchs in the classroom, but again, this is still an emergent technology with potential and has not been successfully wide scale implementation over time in a sustainable fashion. 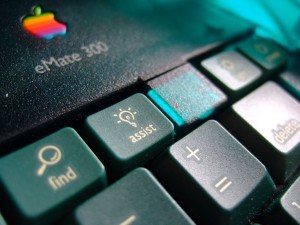 Apple has been down this road before too. They introduced innovative products that were not ready for adoption by the masses and then subsequently dropped. One only needs to remember back to the Newton (1993) which at its introduction was intended to be a complete reinvention of the personal computing paradigm. (I really cannot wait to hear if we hear this repeated 17 years later). There were plans and models of this technology on the drawing board and in 1997, Apple introduced its new under $700 ($699.95) personal computer based on this technology, the eMate 300. This system was rugged, had a smaller keyboard and stylus, built in applications for word processing, spreadsheets, and communications. It has 4 Mb of flash memory (state of the art at that time) that would instantly turn on and back-lighting that would turn on and off, and a battery which would get 10 – 12 hours per charge. It was everything that a user currently now desires when looking for a netbook, or other computing device with the exception of more memory which is now more widely available in larger capacities. Thank you Gordon Moore and the engineers and chip designers who have made this possible.

The eMate was a dynamite product with so much potential. Apple released the technology that could have cornered the educational market and fulfilled the promise of the Newton technology. So why didn’t this device take the world by storm? Most importantly, because the wireless Internet we are beginning to take for granted did not exist. These products were mainly individual computers. The system was not open, individuals could not create new applications for use in these systems, like the current iPhones and iTouchs.  Without a strong developer core and a way to browse the emerging web at the time, the product was doomed. Apple was also reeling as a company, trying to stay solvent enough to stay in business without being sold. It was in this same year the Steve Jobs returned to an Apple Computer to salvage the company and to focus on its core product line, the Macintosh that enabled Apple to become more of a consumer media company, via its introduction of the iPod, iTunes, and the iPhone.

So like many, I will be eagerly anticipating the new announcement. I will be interested to see what emerges and look forward to how this device may transform personal computing. I will be wary, however, once burned by my excitement over the potential of the eMate. I realize that the web and wireless connectivity have matured and may allow the “newest creation” the opportunity to grow and even survive. As for revolutionizing personal computing and education, again, it comes down to creative teachers finding creative ways to implement the tool. It will take a savvy Director of Technology and their team to create the environment and the plan to be able to scale this into a building wide, district wide, or state wide success. We will all need to be patient and let the product grow. This product should be allowed to grow and fill the new niches, some of which we may not be able to identify. We need to be ready to think outside of the box and let this product grow in new directions.

And yes, I will be one of those in line to get my hands on this new product.

1 – For many of you who are too young to remember the buzz around the introduction of the original Macintosh computer, during the Super Bowl, a commercial which has been seen only 1 time in its entirety aired. Directed by Ridley Scott, this commercial which aired January 22, 1984 alluded to George Orwell’s novel 1984. The ending tagline on this commercial, was on January 24th (1984 – nearly 26 years to the day of the announcement), we were going to find out why 1984 was not going to be like 1984.